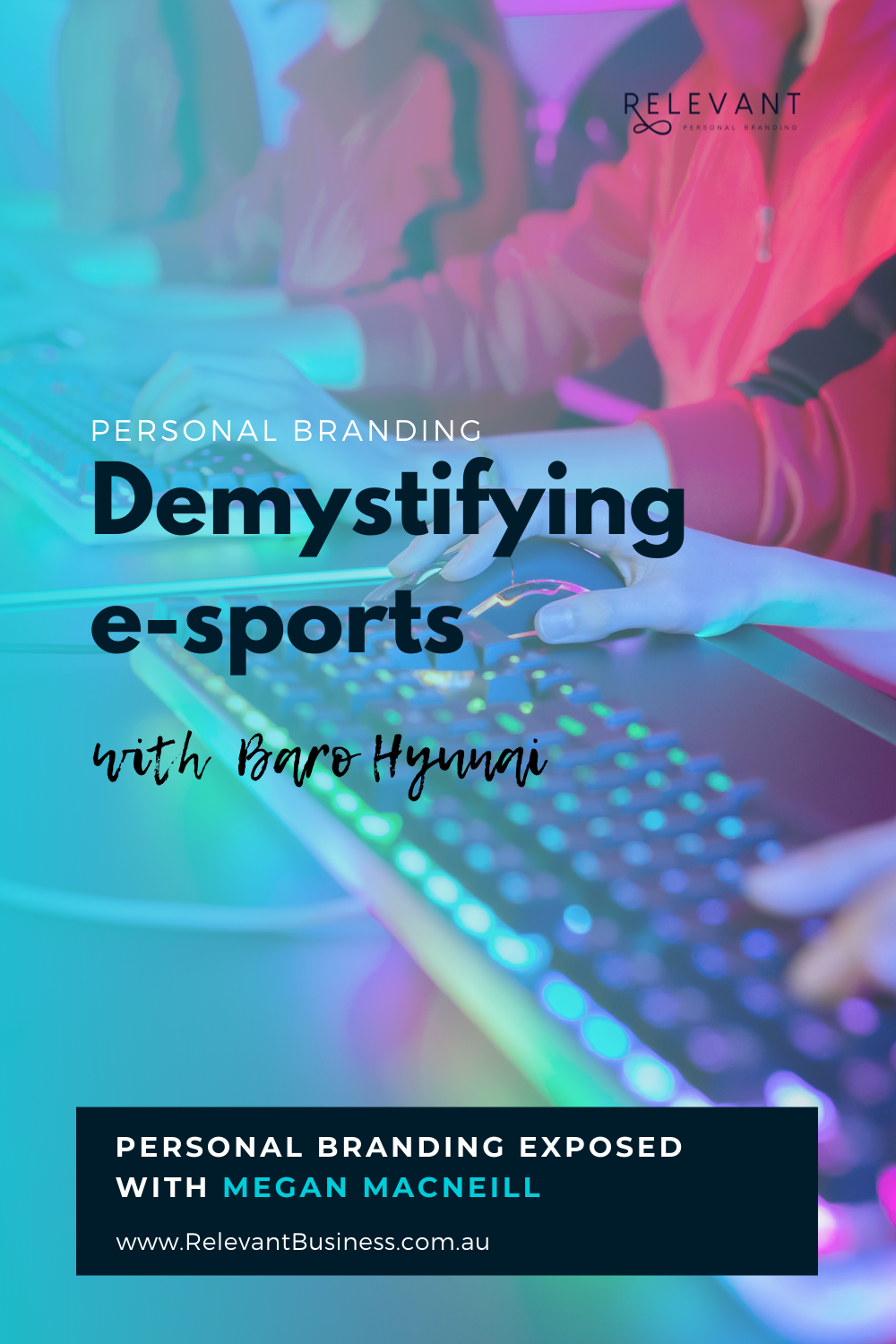 Something I love about the Personal Branding Exposed Podcast is how it opens windows into entire worlds that most people don’t even know exists.

My tall Baro Hyun is a great example of this amazing quirk as we got to talk about the world of e-sports and how an entire industry has been forming around competitive gaming.

During our talk, Baro demonstrated the many challenges this relatively young industry faces, and how it manages to thrive anyway. Here is how that went:

From Engineer to E-sports advisor

First, it’s only proper that we introduce our guest. Baro Hyun leads the E-sports advisory panel at KPMG in Japan, his main professional goal being to convince all the “grown-ups” that gaming competitions are more than just individual fun, but a growing global business to be explored and appreciated.

However, before he got to have such a cool job he worked as an engineer, working with data analytics and AI. When a job opportunity had him move to Japan, he was confronted with a strange reality: “As I grew up as a gamer in Korea, I played a lot of Japanese games, so I came here with a lot of expectations that E-sports should be really big, but to my surprise (that was back in 2017), it wasn’t big at all, although Japan is such a big gaming nation, as everybody knows it.”

With this in mind, Baro had a talk with his boss, and together they found out that there was indeed a lot of potential for E-sports as a market in Japan. One year later Baro and the company would launch their new E-sports advisory service.

When it comes to the potential of E-sports as a business, Baro is very clear about all the possibilities it opens up, although, as he tells us, it was not easy to convince people of this fact at first: “E-sports is a real thing, and this is something I found really difficult to convince people within the firm that I’m working with, because when I first brought this up to the senior executives, the CEO was like ‘what are you trying to do here?

Resistance aside, Baro makes it very clear that E-sports, being an industry that is all about competitive gaming has all the airing potential of any mainstream sport like football.

After all, what draws us into the most modern sport can be summarized in one word: Competition, after all, we are seeing skilled professionals match each other, allowing us to share in their victories, losses, and stories.

In other words, competitive gaming makes for some really good content, especially when it’s done by professional E-sports players who are competing in one of the hundreds of tournaments that happen around the world every year (often competing for prize money that can go up to the millions of dollars).

Easy to say, therefore that it’s less about whether E-sports can become a huge industry, and more about how it already is one that offers plenty of opportunities.

The Future of Esports

Much like in the episode I did with Grant Baldwin a while ago, I was simply blown away by how much I was learning and wanted to know more.  My curiosity had Baro talking about how e-sports were slowly becoming a part of major sports events:

“ Officially, in 2022, the Asian games are going to be held in China and (competitive gaming) is already considered an official metal sport, and as a pilot they already did it in 2018 when it happened in Indonesia, so they already have a couple of E-sports games, one was soccer, and there were a couple others, and Japan actually won the Soccer match.”

If having E-sports as a part of something as big as the Asian Games was not impressive enough, Baro also spoke about rumors that were being spread in the wind about the industry taking an even bigger step:

“We have a conversation going on from the IOC (International Olympic Committee) about E-sports, so they started having a formal forum about it, I think it was from 2018, and it happens on a regular basis, and it was pretty big news for us, because, you know, it’s the IOC! So the rumor was that not on the Tokyo Olympics, or on the next Paris Olympics of on the one after that there is a chance that E-sports might be a part of it, but nothing was confirmed yet, though there is this atmosphere around the idea that it may be a possibility.”

These rumors are extremely significant as they demonstrate how E-sports are not being taken seriously only within a commercial context, but that they were also gaining recognition as an integral part of the sporting world as a whole.

With this recognition, it would only be a matter of time before E-sports teams achieve the same cultural relevance of teams like Manchester United or the Chicago Bulls.

Keeping up with emerging trends and know how to seize them as opportunities for business is an essential skill in Personal Branding, and my conversation with Baro Hyun only drove that point home.

How often do these opportunities present themselves to us, and we refuse to embrace them not because of actual obstacles, but simply due to our fear of putting our chips in something we perceive as untested?

If you would like to listen to other amazing stories like that of Baro, feel free to listen to the other episodes of the podcast, and if you are looking for advice on personal branding, you can contact me on my website or on any of my social media.