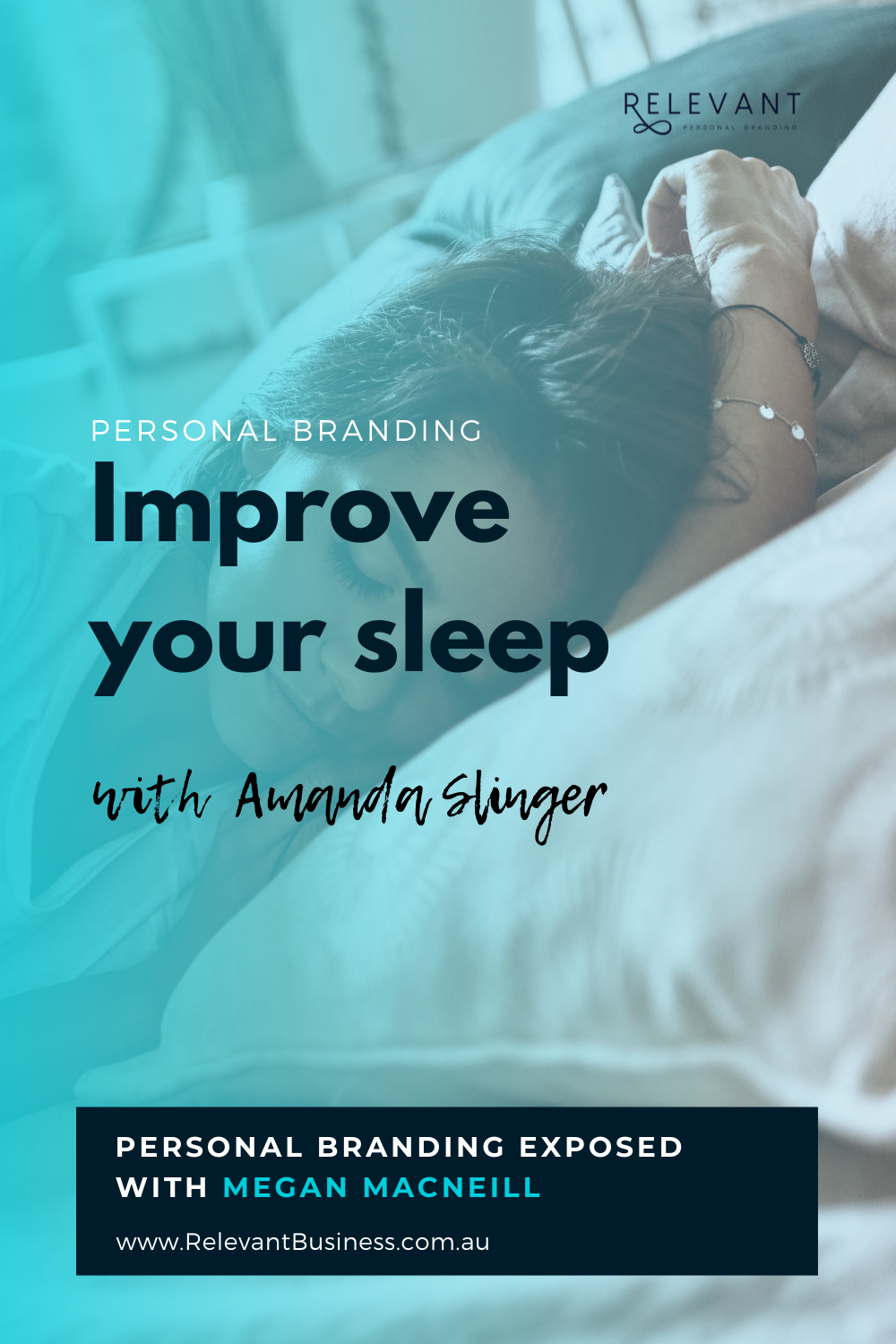 Anybody that has ever had a bad night of sleep knows of the havoc it can wreak on our routine, our psyche and even our physical health.

And, if these reasons are not enough to make anyone prioritise their nightly rest, there is also the immense effect that not being able to sleep well can cause in our relationships, be it professional or otherwise.

After all, it has been proven that a lack of sleep can make you irritable, affect your ability to concentrate and impair your judgement, symptoms that when put together point towards the simple fact that you are not you when you don’t have a decent night of rest.

So, in order to not only help you stay in your best shape to build your personal brand, but also for the sake of improving your quality of life, I got sleep educator Amanda Slinger to share some tips for sleep on the Personal Branding Exposed podcast!

Now, first up, I was curious about how someone would go about becoming an expert on sleep, so as is customary on the show, my first question for Amanda was regarding what she wanted to become when she was just 15.

According to herself, Amanda was “not thinking about growing up”, though she knew she would end up following on the footsteps of her surgeon father or nurse mother, though that was “the last thing on her mind.

She would eventually attempt marine biology, then biology from which she would get “kicked out”, followed by a period where she travelled around Australia in a Kombi Van, where she met a lady that would help her figure out her love for nursing.

As a nurse she would travel quite a lot, going as far as to work in Africa, and after returning to Australia, she started working as a nurse in the mining industry, doing a lot of work involving fatigue management and accident prevention.

“So I was reading about fatigue and the science of sleep, and it really got me excited, and also started looking at the focus that the department of mines was looking at that was fatigue in shift work.”

Amanda’s current field of work came from her studying the relation between fatigue and workplace accidents in mining, so that should give us a good idea of the importance of sleeping.

Don’t leave sleeping for the grave:

After covering Amanda’s fascinating background of how she went from being a world-travelling nurse to dedicating herself to teaching people how to sleep properly, we got to talk about this extremely harmful mentality that has been spreading:

“ For too long there has this message that’s been around ‘I’ll sleep when I’m dead’, […] and that sleep can be compromised when in actual fact that is such not the message you need to be giving people, the science is clearly indicating that you will have a shorter life.”

In other words, science has demonstrated that if you actually try to put that “Sleep when you’re dead” mentality to practice, you may find that this final moment of rest will come much sooner than you expect.

Sacrificing sleep for the sake of longer work hours will also actively damage your productivity due to the symptoms I talked about in the introduction.

The Benefits of Sleep

It feels a little weird to have to list the benefits of something so natural and pleasurable as sleep, but in light of this culture of sleep neglect that we just discussed it actually makes sense to highlight the ways in which good sleeping can benefit you.

There is also the fact that by becoming aware of these benefits we start to prioritize our sleep more, becoming what Amanda describes as “better sleepers”.

According to Amanda, some of the benefits provided by regular sleep include:

“ There is that beauty sleep, there is also that rejuvenation, so  you know while we sleep our cells get a chance to recover, things like immunization.

You and I are in Australia at the moment, but globally we are looking at Covid 19 vaccinations and we want them to be effective so, if you have a great night’s sleep, that immunization is going to have a much better impact.”

Along with explaining the importance of sleep, Amanda also stated some of the ways in which neglecting it can harm you, including a significant impact your appearance and sociability, which can be really damaging for both your career and personal brand.

Eventually our conversation migrated to the topic of how even if we all need at least seven hours of sleep, people tend to have different sleeping habits and tend to sleep on different “blocks”.

When I asked her to explain these blocks, here is what she had to say:

“When I say  “in one block”, I mean a block of time when you are dedicated to sleep,  I’m not suggesting that you sleep for a time in the evening and a time during the day, it’s more of just committing to a block.

If you wake up in the middle of a block, that is okay, we have these micro-awakenings during the night, sometimes we’re aware of them, and sometimes we’re not that is completely natural.”

Now, despite these variations in sleep behaviors and stories of an important person x or y that was able to get by on fewer than seven hours, we all have the need to sleep deeply for at least seven hours a day.

So, the important thing is to pick a time window and dedicate it entirely to sleep to ensure your body has plenty of rest and that you are always at your full power.

Being well rested and in a good mood is an important part of building a personal brand because it ensures that you are always your best self .

It also gives you the focus and energy necessary to put in all the effort that goes into creating that image that you are going to propagate to the world.

So, if you are awake, alert and ready to start, your first step should be getting in touch with me through the website to book a discovery call to see if Personal Brand Coaching is right for you.