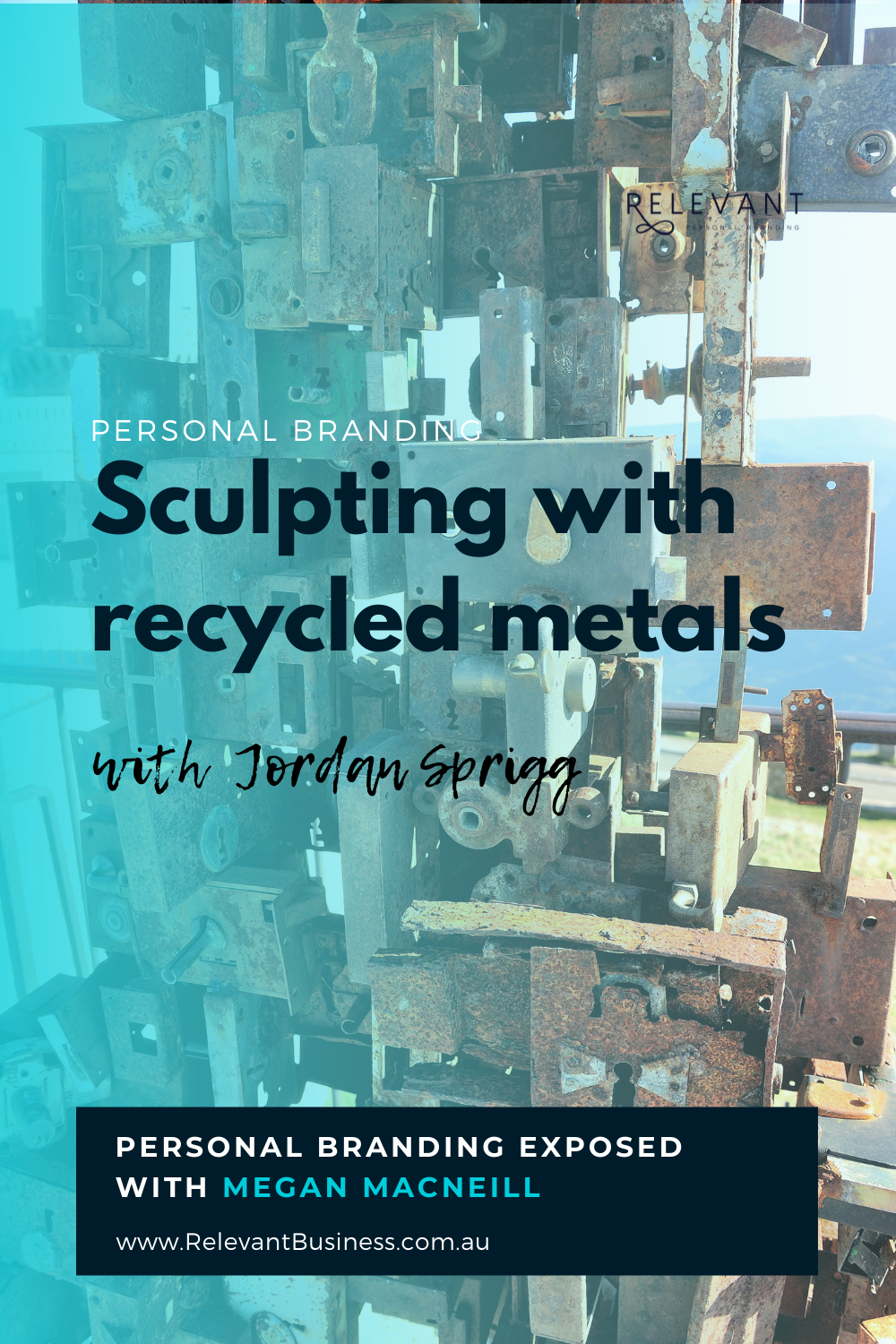 Something that always endeared me about the personal branding exposed guests is how every single one of them was able to take their passions and manifest them into something new and incredible.

Our guest for today, Jordan Sprigg is no exception to this, an artist who harvests retired machinery that goes back over a century in the history of Australia for materials which he transforms into beautiful iterations of many animals.

On this episode, we are going to talk all about his work, from how he got into it in the first place to the many pleasures and challenges he takes out of his profession. So, without further ado, here’s how that went.

Now, for people some of my guests like Aaron Hunt, getting to the place where you are in constant contact with your creative side is something that comes after a moment of “Breakup” where you leave your conventional job to do what you wanted to do all along.

For Jordan however, Metalwork sculpting came naturaly out of his interests, even though he did not think, as a young man, that making a career out of it would ever be possible. As he explains:

“At Fifteen, I had no idea, I did know what I liked and what I didn’t like, I really enjoyed metalwork and the creative side of metalwork and I liked drawing. I didn’t think you could really make a career as an artist, so I didn’t even think about that as an option.”

Yet, that didn’t stop Jordan from chasing his interests, even as a simple hobby, he continued to be fascinated by both the form of animals and metalworking and the results of him chasing his passions were soon noticed, landing him the beginning of his business.

One of the aspects of Jordan’s work that to me adds so much value to every sculpture is the fact that he is reutilizing pieces of metal that were already around for a long time and gives them a new meaning and function.

This too, he explains, came naturally out of the abundance of material found in his parents farm, as Jordan recalls:

“The metalwork kind of combined with the recycled metal, that happened just because I lived on a farm, and as I was growing up my dad would say “look you can’t use new metal, but we got tons and tons of old meta”l. It happened naturally through that.”

The use of old recycled metal would later become a staple of Jordan’s work, and today he even goes as far as letting the materials he uses as close to their original state as possible in order to make the age of the pieces itself, with the rust and feeling of age, a part of his art.

Now, much like any artist, Jordan has his own creative process that goes from picking the material he likes the most, to deciding on an animal to build and through the actual process of building said animal.

Jordan, explained that his creative process is much more subjective and that when selecting the materials to build his next piece he rarely has a finished product in mind, this particular part, would only come later:

“I try and really just grab as much as I can, I don’t really know where each piece is going, it’s more kind of like a jigsaw puzzle that I just collect and collect, so I kind of pick the pieces that I like, bring them to the shed, clean them, it’s more just trial and error.

Jordan relates that his  preference for sculpting animals is also the fruit of a long time interest of his and that even in his childhood they were his go-to object to draw.

After having picked an animal, Jordan makes a “2D frame” of it and slowly starts the process of building it up with the carefully selected materials that can be anything from old tools to pieces of retired vehicles and machinery.

The Importance of the Internet

As our conversation moved forward, we eventually got to start talking about the importance of any business having an online presence, and Jordan explained how engaging in social media and having a website helped in nurturing his career.

Many were the examples he gave of galleries and exhibitions overseas that showed interest in his work, but the he remembered most fondly of was one that almost didn’t happen.

“I’ve had amazing opportunities to showcase my work overseas and probably the craziest one was when I’ve had an exhibition that was going to happen in Qatar, and it was all kind of paid for by the government, and I found  the invitation in my junk mail.”

There are two lessons to be learned out of Jordan’s story, the first is that you should always check your junk mails, and the second is that having a strong online presence for your business can take it to heights you can’t even imagine.

Jordan Sprigg is a great example of someone that had something amazing to share with the world and got an opportunity to do that through the use of the internet and sound personal branding.

If you too have an amazing idea that can benefit and uplift the people around you than there is simply no reason to keep it in obscurity, the world is full of opportunities to be offered to those willing to take them.

So, it is with great pleasure that I would like to embody one of such opportunities in the form of a full personal branding coaching program for you to learn how to share all the value you have and enrich hundreds of lives.