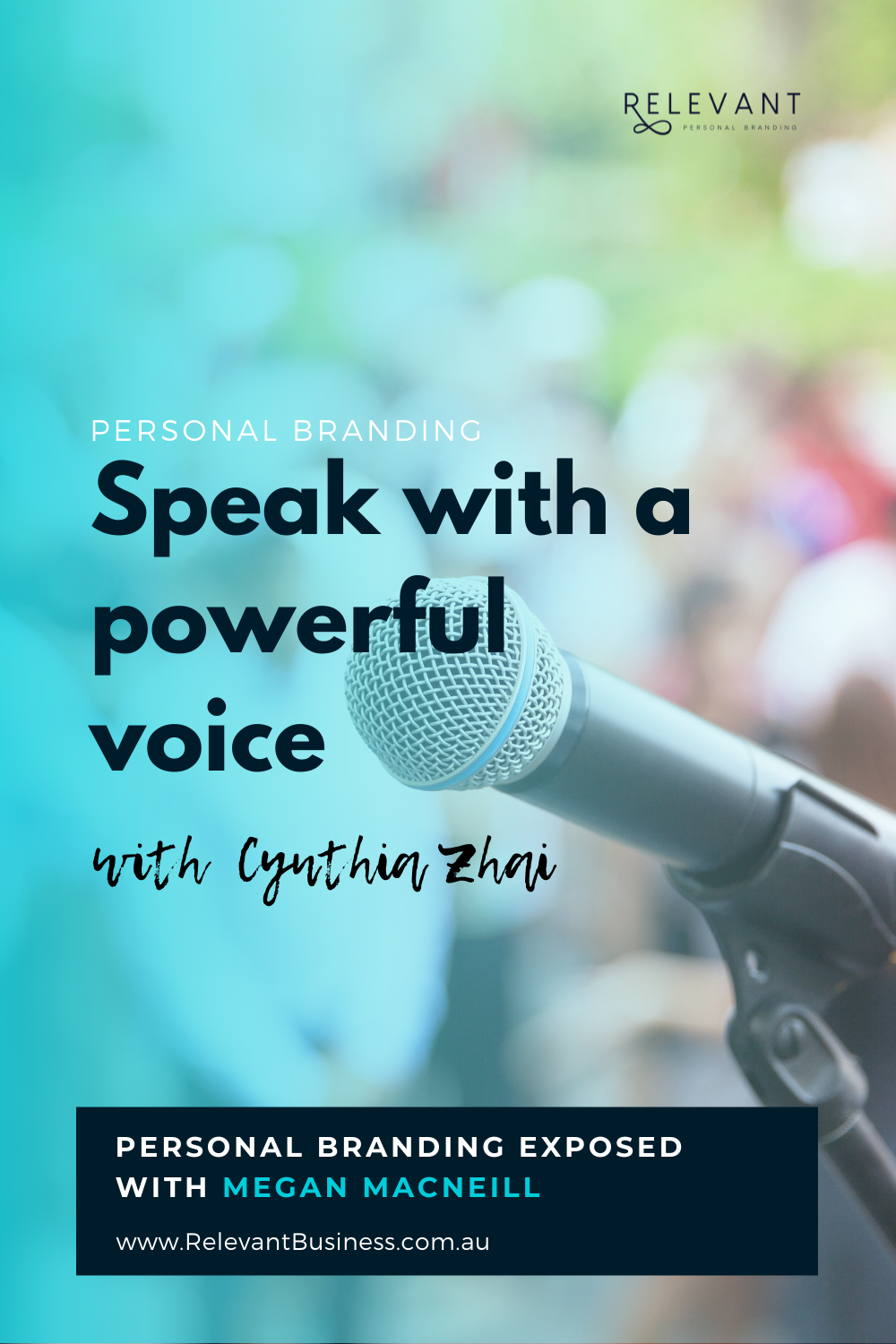 Oh let me take you back to 2013! I remember one of my most painful memories when it comes to public speaking was having to introduce another speaker during an event.

Thanks to my MC going walk abouts, I was left to it!

Not only was I extremely nervous having to address a large crowd, I was also a Scottish woman in Australia, which meant that besides having all the usual public speaking nerves, I also had an accent that made someone heckle

If only I had met Cynthia Zai back then, however, I am still very lucky to know her right now and have her on the Personal Branding exposed podcast to talk about her work as a voice coach and give out some advice on how we can use our voices to their fullest potential.

Here’s how that went:

Now, it’s not every day that you get to talk to a voice coach, so the very first thing that I wanted to ask Cynthia was about what her work entailed and what exactly was it that she did for her customers.

Her answer came in layers, first in the form of her explanation of how our voice affects not only our confidence but also the to which people took us seriously, and then in the very way in which she explained this.

Cynthia’s voice was had this deep and velvety quality to it that made it so that everything she said evoked this sense of attention, making full use of this carefully crafted technique, she went on to tell me how she helped her students reach this same result.

“The main thing is to develop the voice mechanism, for example there are three areas in our voice that are potentials, the breathing, the way you are placing your voice and how much vibration you have in your voice.”

She then went on to explain how recent research demonstrated that as a species, humans tended to relate deeper voices with authority figures, which soon brought us to our next topic.

That we tend to associate deeper voices with authority figures is something that you have likely noticed by yourself before, yet hearing Cynthia talk about lit a sparkle of doubt in my mind that I was quick to mold into a question.

After all this association between deeper voices and authority seemed to stem from the fact that for most of history authority was held by men, and I wondered if that didn’t put women, who naturally have higher pitched voices in disadvantage.

Cynthia replied as such:

She then went on to give the example of Margaret Tatcher who had to work on her voice and develop this resonance for a long time in order to advance in her political career.

From here our conversation turned towards how this “powerful voice” related to the different situations of day-to-day life, after all, the way we speak at an interview is hardly going to be the same as at the bar with our friends.

This what Cynthia had to say about it:

“So, for voice there are two areas one of them is voice quality which will not be changed, voice quality is the depth, the fullness of your voice, once is developed will be there with you.

The other area we can change is voice color, which is emotion, so for example, when you are with your friends you will become more excited so then the excitement is one of the emotions we can bring across in the voice.”

In other words, through the process Cynthia teaches, your “powerful voice” becomes just your voice and much like you can expect, it would adopt many forms depending on what you are expressing.

This is the part where I admit that as I was talking to Cynthia and heard about all the ways in which we can hone our voices, I began to make the conscious effort to make my voice deeper than usual.

Of course, we could expect this as seeing how she turned projecting one’s voice into something of an art form, I was excited to apply some of the principles she was sharing, and I figured you would be as well, which is why I asked her for some advice:

Here is what she had to say to those that were looking to improve their voice:

“ So, the very first thing in order to diagnose themselves is to record themselves, so even though the recorded voice, most people will hear it and say “oh it’s terrible”, and blame the recorder.”

As she said that, I could imagine people who were listening letting out a sigh as recording and hearing yourself is synonymous to stress for many, luckily, she would then explain that sighing actually helps:

“ So this exercise is to sigh, before their meetings before their video calls, because when they do that they will break the pattern of holding on to the tension.”

Honing your voice so that it boosts your confidence and has the expected impact on your audience is a process of growth and insistence, and this process is made easier under the guidance of a coach like Cynthia.

This is something that voice training has in common with personal branding, both are a painstaking process where you improve step by step, and both can become a frustrating cycle of trial and error without mentorship.

So, in order to make your personal branding journey a lot smoother, why not consider contacting me, be it on this website or on any of my social media in order to get yourself a full coaching program?