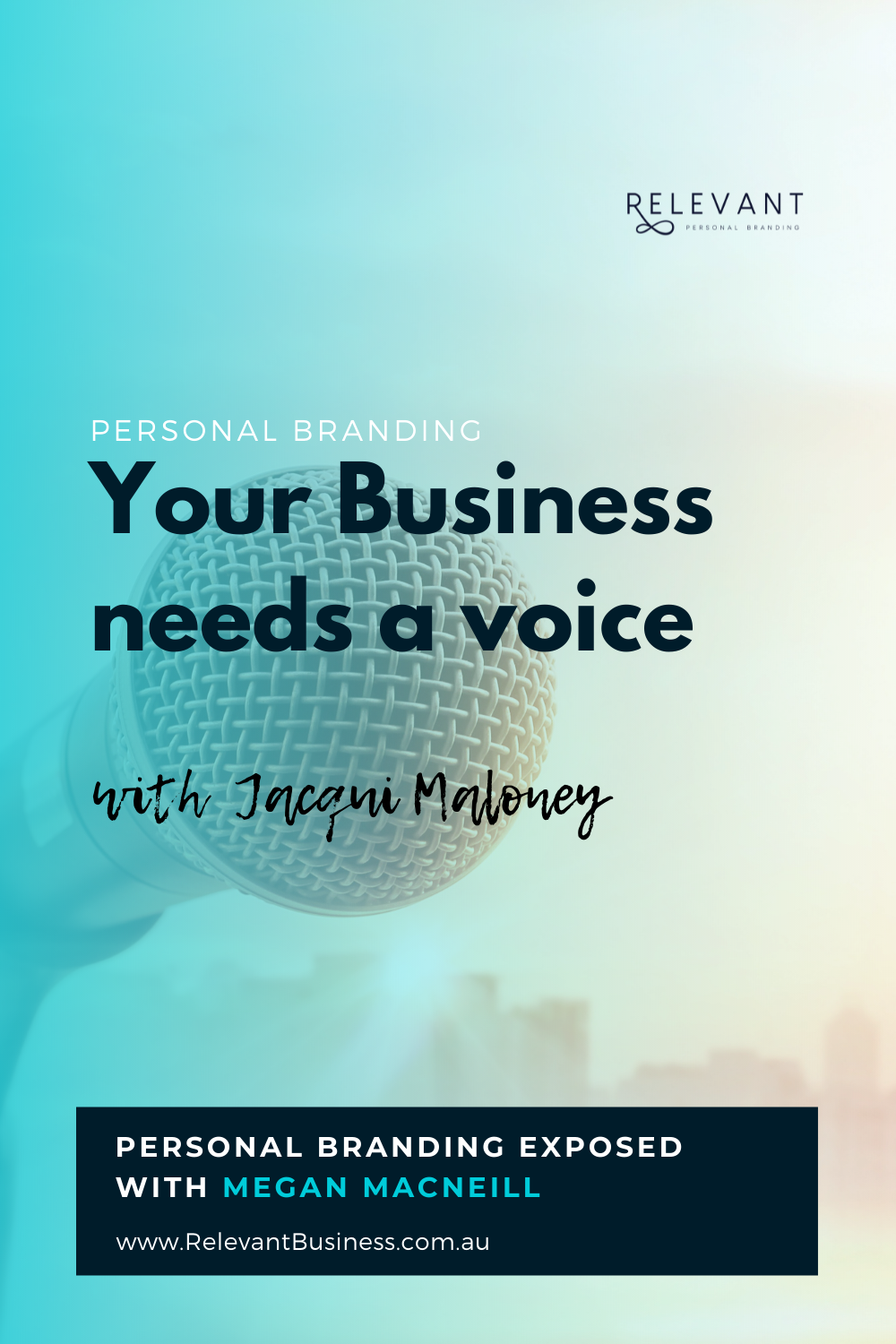 There have been many episodes of the Personal Branding Exposed Podcast where I mention the importance of being “out there”, of giving people the opportunity to know and eventually trust you.

However, for many, this can be a challenging feat due to confidence issues. Luckily, for episode 38 I got to talk with the screen and television actress Jacqui Maloney.

She shared with us some of the secrets she teaches other women in order to help them feel more confident and comfortable in front of the camera, and how to rock it no matter if it’s on a national network or on their own Instagram page.

I always like to trace a guest’s work back to the initial aspirations they had while still in their teens because it always draws out the many ways in which life tends to surprise us and how the experiences drawn from the unexpected form our personal brand.

So, you can imagine my surprise when upon asking Jacqui what she wanted to be when she was fifteen, she replied “exactly what I’m doing now.” without even skipping a beat. After all how many people can claim they fulfilled their childhood dream?

Yet she explains that it was more than just a dream:

“Acting was something I always wanted to do as a kid. I was always putting on shows and always dragged my brothers up to do concerts, you name it, all through primary school and high school […] It was always me.”

For many the profession they want to dedicate themselves to is something that they come into as the years go by, for others it can be an instinct, neither is inherently better than the other, but once you grab a hold of your “thing”, it will be a part of you and your brand by extent.

Now, not only does Jacqui act in front of the cameras, participating in things like her KFC commercial or my parent’s favorite series, “A Place To Call Home”, she also lends her voice to a whole number of productions.

While talking about her work as a voice actress, she talked about how the field was a challenge for her at first, but how she was absolutely in love with this particular aspect of her career.

“ I was like ‘yeah, I’m an actor, and I can talk, so therefore, I must be able to do voice-over at the same time!’ Well, no. So I put some kind of demo together, I had no training, walked into my first professional gig and blew it.”

And yet, in her failure, Jacqui showed the resilience to keep trying by listening to the provided feedback and improving through constant practice.

This is a really important lesson to learn even if you are not from an artistic field like acting: Failing doesn’t make you a bad professional, not learning from failure, however, might.

How To Do Your Best Voice

Jacqui is not the first guest I’ve had on the podcast that helps people improve their ability to speak and present themselves, I’ve also had brilliant specialists like Grant Baldwin sharing some tips on how to speak confidently to an audience.

However, where I think that Jacqui stands out is that her approach is almost universal and can be applied to Podcasts, TikTok, YouTube, and so many other mediums.

When it came to recording yourself for these platforms, Jacqui’s advice was simple: Preparation and rehearsal.

First, she talked about how “just winging it” for the sake of saving time may be counter-productive even if you are extremely confident on your ability to deliver.

“ You start talking, and then you stumble because you hadn’t thought of what you were going to say next, and then it’s like ‘great, I can’t use that take, let’s start again.”

If this vicious cycle continues for too long it’s really easy for people to lose motivation and give up on recording themselves completely, and that is just so many doors you are closing for yourself.

The immediate effect of hitting a record with a clear idea of what you are about to say is that you are going to speak much more clearly and approach the recording session from a place of calm. As Jacqui Explains:

“We stumble over our words when we are nervous, we speak so much faster than we need to, we start yelling at the camera, when the microphone is literally just there.”

There are a few precautions you can take in order to avoid these many ticks of being nervous in front of the camera which fall inside the preparation and rehearsal she mentioned.

For example, if you are using a camera, you can glue a post-it note roughly on the direction of where the camera is with a few keywords that can rail-road your train of thought and help you move better from one subject to the next.

There are also a few diction exercises you can use to practice and warm up your face muscles before recording (we demonstrated a few on the episode itself).

That is not to speak, of course, of all the tricks you can come up with yourself as you become more experienced and comfortable while recording, just pay attention to what you can improve with each new recording session.

Getting to have with such a prominent figure like Jacqui Maloney as a guest on Personal Branding Exposed was both an honor and a pleasure, not only because she is extremely fun to talk to, but also to the weight of the techniques she shared.

An important element of personal branding is projecting your best qualities outwards, which due to personal insecurities or other similar issues can be extremely hard for some people, so getting to share some ways in which you can surpass this fear was truly awesome.

If you’d like to learn more about personal branding and how to be the best version of yourself in order to further your business or career, you can always contact me either through my website, or any of my social media.